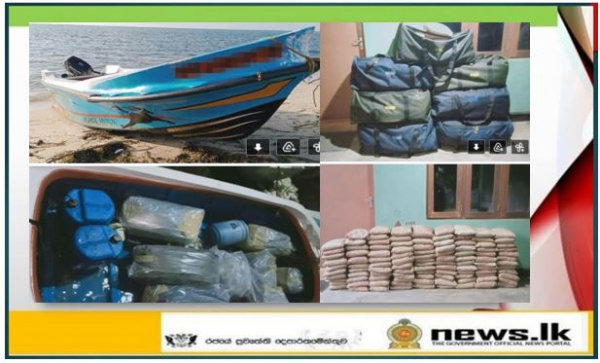 Sri Lanka Navy has been conducting regular operations in coastal regions of the island to ward off a wide range of nefarious activities stemming via sea routes. Accordingly, SLNS Welusumana in the Northern Naval Command mounted this special operation covering the sea and beach areas of Ariyalai in the early hours of today (21st November). The operation led to the recovery of 07 travelling bags containing about 229kg and 350g of Kerala cannabis stuffed in 105 packages. This stock of Kerala cannabis was concealed in a dinghy which was abandoned in coastal waters by smugglers, due to naval operations. As such, the stock of Kerala cannabis and the abandoned dinghy were taken into naval custody.

Meanwhile, the street value of the seized stock of Kerala cannabis is believed to be over Rs. 68 million.

The operation to recover this stock of Kerala cannabis was conducted adhering to COVID-19 protocols due to pandemic concerns. The narcotic substance and the dinghy held in this operation are being kept in naval custody until they are produced for onward legal proceedings.