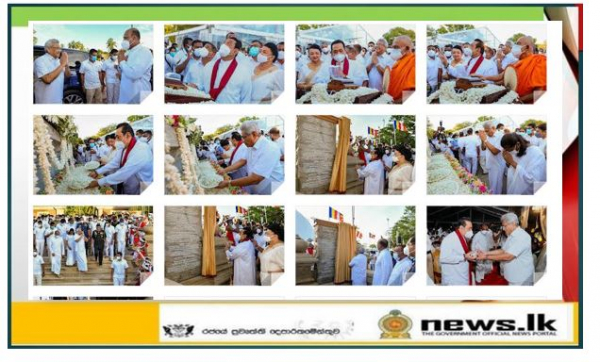 The 282 ft high huge monumental hemispherical pagoda of this magnitude with a circumference of 801 ft began its erection soon after the former President Hon Mahinda Rajapaksa unified the country in May 2009 after eliminating the 30-year long terrorism at a time the incumbent President Gotabaya Rajapaksa was serving as the Secretary of Defence at the Ministry of Defence.

Ever since its cornerstone was laid, majority of Army personnel as prime movers with members of the Navy, Air Force and Civil Security Department personnel, paying the highest reverence to the project sweated day and night to erect this mammoth pagoda with the generous financial support of all tri service personnel and devotees from all corners of the world. In the most recent past, General Kamal Gunaratne (Rtd), Secretary Defence on the directions of the President was insrumental in bringing the entire project to a resounding success.

Today’s landmark inaugural ceremony that heralds a new epoch in the revival of Buddhist legacy in the country commenced soon after the arrival of HE the President, First Lady, Hon Prime Minister and his spouse at the venue.

Secretary Defence General Kamal Gunaratne (Rtd) and Mrs Gunaratne, Chief of Defence Staff and Commander of the Army, General Shavendra Silva and Mrs Sujeewa Nelson, Navy Commander, Air Force Commander, Inspector General of Police and the Director General Civil Security Department after a warm welcome ushered the President and the Prime Minister to unveil the plaque, related to the ceremonial inauguration of the project.

The uncovering of the pinnacle and the crest gem atop the dome of the Stupa by a representative group of the Maha Sangha followed, next in the company of the Secretary Defence, General Kamal Gunaratne (Rtd), Chief of Defence Staff and Commander of the Army, General Shavendra Silva, Navy Commander, Air Force Commander, Inspector General of Police and the Director General Civil Security Department, together with a representative group of parents, spouses, children of fallen War Heroes and a permanently-injured War Hero as reverberating drums, air drop of flowers, chanting of ‘Jaya Piritha’, symbolic invitation to deities, etc simultaneously began to add more importance to the ritualistic traditions of Buddhist faith.

Prelates, accompanied by above representatives then made maiden floral offerings to the new Buddha shrine at the new Stupa compound while the Secretary Defence set light to the eternal stone lamp, ‘Dolosmahe Pahana’ before both the President and the Prime Minister, foolowed by several widows of Senior War Heroes were subsequently invited to garland the relic casket in the chamber with ornaments as offerings and light incensed sticks.

The brief ‘ Daham Hamuwa’ that ensued after a while commenced with observance of the customary two-minute silence in honour of fallen War Heroes and five precepts before the Secretary Defence was led to hand over the chronicle inscription (Sannasa) that declares the formal completion of the project to the President. The day’s proceedings then reached its apex when the President in turn reverentially offered the ‘Sannasa’ to members of the Maha Sangha, headed by prelates.pleading them to consecrate the sacred ‘Stupa’ and the premises to the ‘Sasana’ from now onwards.

The first ‘Gilanpasa Pooja’ offerings to the newest ‘Stupa’ in Sri Lanka then set in as the Maha Sangha, First Lady, Hon Prime Minister’s spouse, the spouses of the Secretary Defence, Commanders of the Army, Navy and Air Force, Inspector General of Police, Director General of Civil Security Department and Colonel K. S Mohan Kumar, Officer Commanding of the Project joined in succession.

The three ‘Anushasana’(orations), delivered afterwards by Most Ven Dr Niyangoda Vijithasiri Anu Nayake Thera of the Malwatte Chapter, Most Ven Wendaruwe Sri Ratanapala Anu Nayake Thera of the Asgirya Chapter and Most Ven Dr Pallegama Sri Nivasabhidana Nayake Thera, Chief Incumbent for all eight places of worship (Atamasthanadhipathi) underlined the significance of the construction of a mammoth Stupa of this magnitude, reminding great works of this nature by our past royalty for the spiritual wellness of countrymen.

Hon Prime Minister Mahinda Rajapaksa, the founding architect of this colossal Stupa in contemporary times who initiated the project in 2010 whose birthday too falls today (18 November) soon after he, as then President of Sri Lanka unified the country by eliminating separatist terrorism, was then invited to address the occasion.

Members of the Maha Sangha, appreciative of the meritorious project and the efforts taken in this direction showed their gratitude afterwards by presenting mementos to both HE the President Gotabaya Rajapaksa and Hon Prime Minister Mahinda Rajapaksa, minutes after the Premier’s address to the occasion.

HE the President after a while symbolized his appreciation and recognition of the tireless commitment, made by Army, Navy, Air Force and Civil Security Department personnel and the Officer Commanding, Colonel K. S Mohan Kumar of the project presenting mementos and certificates of appreciation to the representative group.

Secretary Defence, General Kamal Gunaratne (Rtd) then attached further dignity and importance to the historic event by presenting the maiden copy of the ‘Coffee Table’ pictorial book that illustrates various phases of the ‘Stupa’ construction project to HE the President, Prime Minister and a few others. The culmination of the ceremony followed with the vote of thanks, raised by General Kamal Gunaratne (Rtd)

The illuminations of the Dagoba and the premises were afterwards switched on by Members of the Maha Sangha and HE the President.