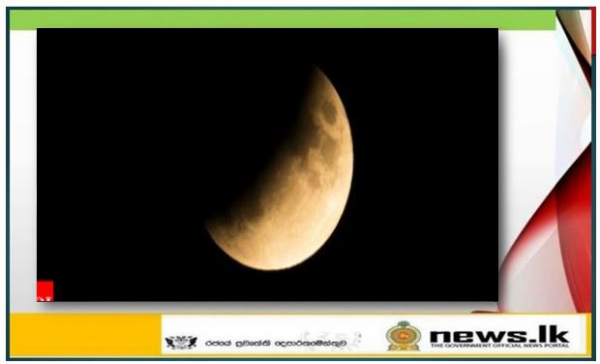 While having the opportunity to see the three brightest planets of the solar system Jupiter, Saturn and Venus in a line in the western skies just after the sunset these days, the longest partial lunar eclipse in 580 years will take place on the day time of November 19th, said Prof. Chandana Jayaratne, the Director of Astronomy and Space Science Unit, Department of Physics, Colombo University.

Though the eclipse is visible to a large part of the world for the countries in America, North Europe, East Asia, Australia, Pacific, including the east part of India, it will not be
visible to Sri Lanka. The total duration of the partial eclipse phase is 3 hours and 28 minutes. The eclipse begins at 11.32 a.m. and ends up at 5.33 p.m. Sri Lanka standard time with total duration 6 hours and 1 minute. The reason for the long duration is that the eclipse is happening when the Moon is at the apogee – the furthest point Moon gets from Earth in its elliptical orbit, and therefore the slowest speed of the Moon.

Usually, there are two eclipses in a row with two weeks gap. Accordingly, 14 days later, on December 4th there will be a total solar eclipse too, commencing from 10.59 a.m. and ending up at 3.07 p.m. This eclipse too will not be visible to Sri Lanka and will be visible only to Antarctica and countries in parts of southern Africa, including locations in South Africa and Namibia.