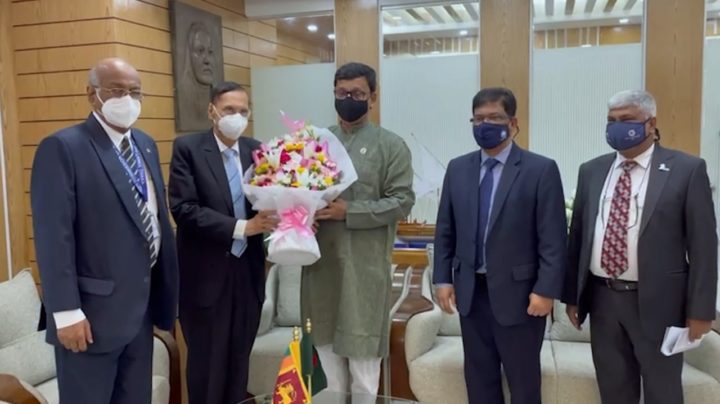 A Sri Lankan foreign ministry statement said ministers Peiris and Chowdhury had agreed that enhanced cooperation between Chittagong and Sri Lankan ports will facilitate a win-win situation for both countries in terms of financial resources and time saved if a transit hub in Sri Lanka is utilised for access into the Gulf and the Mediterranean.

“The Bangladesh Minister indicated the importance being currently attached by Prime Minister Sheikh Hasina to the subject of shipping in Bangladesh, with initiatives for the development of several other ports including the Matarbari in Cox’s Bazar district, which is being developed as a deep sea port with the assistance of Japan,” the statement said.

The ministers have decided to hold meetings in Colombo in early 2022 and to reconvene a joint working group that was last held in Dhaka 2014.

“Issues relating to feeder services and a comprehensive coastal shipping agreement will be among the subjects on the agenda at the meeting in Colombo,” the foreign ministry said.

At the first meeting, the two ministers had discussed improved trade between the countries, particularly in the area of cooperation in shipping given Sri Lanka’s focus as a shipping.

The statement quoted the minister as saying that Sri Lanka would like to strengthen cooperation between the ports of Chittagong in Bangladesh and the ports of Colombo and Hambantota.

The ministry said the discussions had emphasised feeder services and coastal shipping arrangements.

“Cooperation between Bangladesh and Sri Lanka regarding a transshipment hub would be beneficial to Bangladesh because of the reduction of time and nautical miles.”

The ministers had also discussed cooperation in conservation of marine resources and security within the Indian Ocean Rim Association (IORA) framework. (Colombo/Nov18/2021)