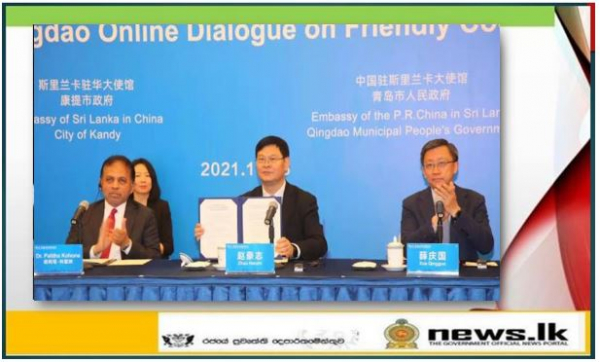 The signatures were affixed through a video connection. The signatories were Mayor Zhao Hao Zhibin for Qingdao and Mayor Kesara Senanayaka for Kandy.

Earlier, the Mayor of Qingdao, Zhao, warmly welcomed Ambassador Kohona and his delegation and provided a general briefing on Qingdao. Mayor Zhao said that from January to September 2021, Qingdao’s GDP grew by 7.1%, and it is expected to achieve a total import and export volume of 800 billion yuan this year. In Qingdao, home appliances and electronic information systems are the leading industries. The Maglev train was built in Qingdao. The development momentum of high-end machinery manufacturing and the marine economy was very satisfactory.

Ambassador Dr. Palitha Kohona introduced Sri Lanka, and Kandy in particular, to Mayor Zhao, and expressed the expectation that relations would be strengthened further through enhanced exchanges and cooperation between the two sides in the future.

The Deputy Secretary of the CPC Qingdao Municipal Committee, the Ambassador of China to Sri Lanka Qi Zhenhong, and the Mayor of Kandy Kasera D. Senanayake delivered speeches at the event. Member of the Standing Committee of the municipal Party committee and vice mayor Xue Qingguo presided.

Ambassador Kohona, speaking at the event, said that over the past 70 years, Sri Lanka and China have maintained close cooperation in various sectors, and the two countries have supported each other in multilateral fora. He said that he was happy that he was the bridge between Kandy and Qingdao as they fostered closer and friendlier relations to achieve mutual benefits and win-win results. Kandy could benefit from Qingdao’s booming economy, it’s cutting-edge technology and world class education facilities.

Ambassador Qi Zhenhong said that Qingdao and Kandy were the 13th pair of friendly city agreements concluded since the establishment of diplomatic relations between China and Sri Lanka in 1957. These will further promote understanding and friendship between peoples, and will also paint a colourful collage in the history of local exchanges between the two countries. Mayor Zhao Haozhi said that the One Belt One Road and a new Shanghai Cooperation Organization Demonstration Area (SCODA platform) for international cooperation were being strengthened in Qingdao. He hoped that both sides will make full use of the SCODA platform to enhance exchanges in the fields of economy, trade, tourism and culture. He enthusiastically welcomed Kandy enterprises to use SCODA to display their products and for trade promotion. He will also encourage Qingdao enterprises to carry out cooperative projects in Kandy. Mayor Senanayake said that the conclusion of the friendship city agreement between Kandy, a UNESCO world heritage city, and Qingdao will help to promote bilateral cooperation in many fields