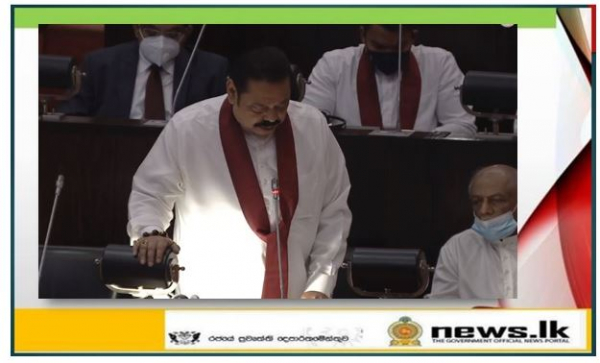 The Hon. Prime Minister Mahinda Rajapaksa said that despite the challenges, the Government continues to invest in the development of the country’s economic and
social infrastructure. He said this while participating in the Second Reading debate of the budget held in Parliament (Nov-16)

He further stated that;

In the recent past, we have had to face many challenges in terms of public finance. Nevertheless, we look forward to continuing to revive the economy and facilitate growth
as expected in the years to come.
The foreign sector of our economy is facing challenges due to the impact of the COVID – 19 pandemic but the Government and the Central Bank are taking steps to secure foreign exchange inflows in the future to improve foreign exchange, liquidity and ease pressure on the rupee, the Prime Minister said. Furthermore, he said that with the
resumption of the global tourism industry, significant positive growth is expected in Sri Lanka’s tourism industry in the future.

Whilst stating that the Government was working with the Central Bank to promote foreign employment and attract remittances to the banking system, the Prime Minister also stated that Government is also pleased with the recent announcement by the Central Bank of its “Six Month Vision to Ensure Macroeconomic and Financial Systems Sustainability” aimed at further enhancing the confidence of all stakeholders in the economy, including short-term strategic plans to strengthen the stability of the foreign sector.

We know that the economy is going through a challenging period. We are confident that the progressive proposals made in this Budget will strengthen the economy in the years to come and beyond. Our Futuristic Plans are clearly stated in the policy implemented under the leadership of His Excellency Gotabhaya Rajapaksa. He said the government had continued to implement the policies of the ”Prosperity Vision” even within the limited fiscal space.

“We have so far provided employment to about 60,000 unemployed graduates.” The Prime minister stated. One hundred thousand untrained persons from low-income families have been provided employment opportunities in the public sector with the objective of reducing poverty. The government spends about 3.5 billion rupees a month to pay salaries for these new recruits in the public sector. This Budget has given good support to the implementation of people centered social and economic policies that benefit all. I urge all to join hands with the Sustainable Solutions Program that we are implementing to overcome the challenges facing the country and contribute to the progress of the country.” he said.