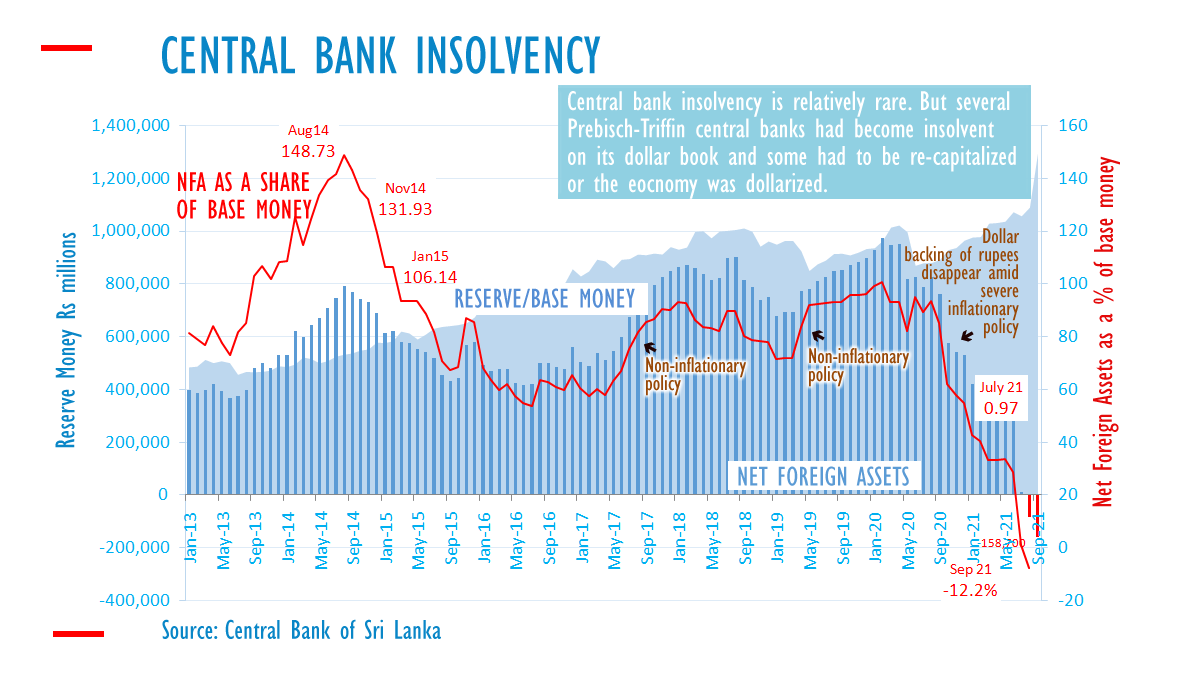 Sri Lanka has suffered balance of payments troubles ever since a Latin America style money printing central bank was set up by a Federal Reserve official in 1950, dooming the country to import and exchange controls as well as social unrest.

“Dr. N.M.Perera, in his 1970/71 Budget Speech has presented a deep analysis of the management of foreign reserves in the country and has stated that no government since independence has managed its foreign reserves with a long term view,” Finance Minister Basil Rajapaksa said in his budget speech for 2022.

“In that, he states that instead of building foreign exchange reserves, we have used it for the importation of goods creating a foreign reserve crisis and, thereby, seeking the support of the International Monetary Fund (IMF).

“From the first IMF facility in 1961, successive governments have resorted to short term assistance from the IMF, and our leaders and financial sector experts have failed in introducing a sustainable long term programme to manage our foreign reserve.”

Sri Lanka had foreign reserves of 11 months of imports when a currency board that could not control the call money rate with liquidity injections was abolished.

Minister N M Perera presided over Sri Lanka’s closed economy of the 1970s when malnutrition rose and the ‘Triposha’ nutrition program was started. There were price controls, licensing and ques.

Gross official reserves were 42 million US dollars in 1970 and there were foreign borrowings which were also driving up imports.

At the time the central bank engaged in re-financing the private sector through various money-printing schemes for agriculture and tea. In 1969 under then Prime Minister Dudley Senanayake Mercantilists and introduced Latin America style FEECS for foreign exchange.

Sri Lanka’s draconian import control law through which rent-seekers were able to exploit the people was also enacted that year.

Mercantilists had changed the original central bank law to allow it to print money for the private sector including through a long term credit fund, expanding quasi-fiscal activities and balance of payments trouble.

Due to similar Keynesian policies involving output gap targeting, the entire Britain Woods peg system was under threat and gold and oil prices were zooming.

By 1970 President Nixon had appointed Arthur Burns as Fed Chief who was also printing money and the Bretton Woods system collapsed in the following year amid a precipitous fall in US gold reserves.

Bank of England was also in the Sterling crisis in the period due to Cambridge economics and became the top borrower from the IMF surpassing any other country in the world.

UK’s 1970s Chancellor of the Exchequer cut value-added tax and printed money like Sri Lanka did in 2019 engineered a ‘Barber boom’ which shattered the balance of payments and triggered widespread strikes. In 1976 the UK went for a massive IMF bailout.

Why Singapore chose a currency board over a central bank

“My Cabinet colleagues took careful note of these dramatic events as they unfolded on the world’s financial scene,” Minister Goh said later.

“None of us believed that Keynesian economic policies could serve as Singapore’s guide to economic well-being.

“We retained the CBS and when the Monetary Authority of Singapore (MAS) was set up in 1970, it performed all the functions of a Central Bank except for note-issuing powers.

“Our economy was and is both small and open. Financing budget deficits through Central Bank credit creation appeared to us as an invitation to disaster.

“There was no effective way of exchange control in an open trading economy like ours to deal with the inevitable balance of payments troubles.”

Both the US and UK tightened monetary policy under President’s Reagan and Prime Minister Thatcher about a decade after Singapore and Japan.

There has been no improvement in monetary knowledge over 50 years, analyst say though A S Jayewardene ended rural credit which helped create massive inflation and depreciation and sabotaged the ‘open economy’ of J R Jayewardene in the 1980s.

US monetary policy had again deteriorated and Fed Chief Jerome Powell is firing an indiscriminate aggregate demand bubble which has set fuel and food commodities bubbling up.

“Our country is recognized globally as a top brand in the production of related Rubber goods,” he said.

“As such, I propose to restrict the importation of rubber related products and to promote investments in the production of rubber-related finished products instead of exporting rubber as a raw material.”