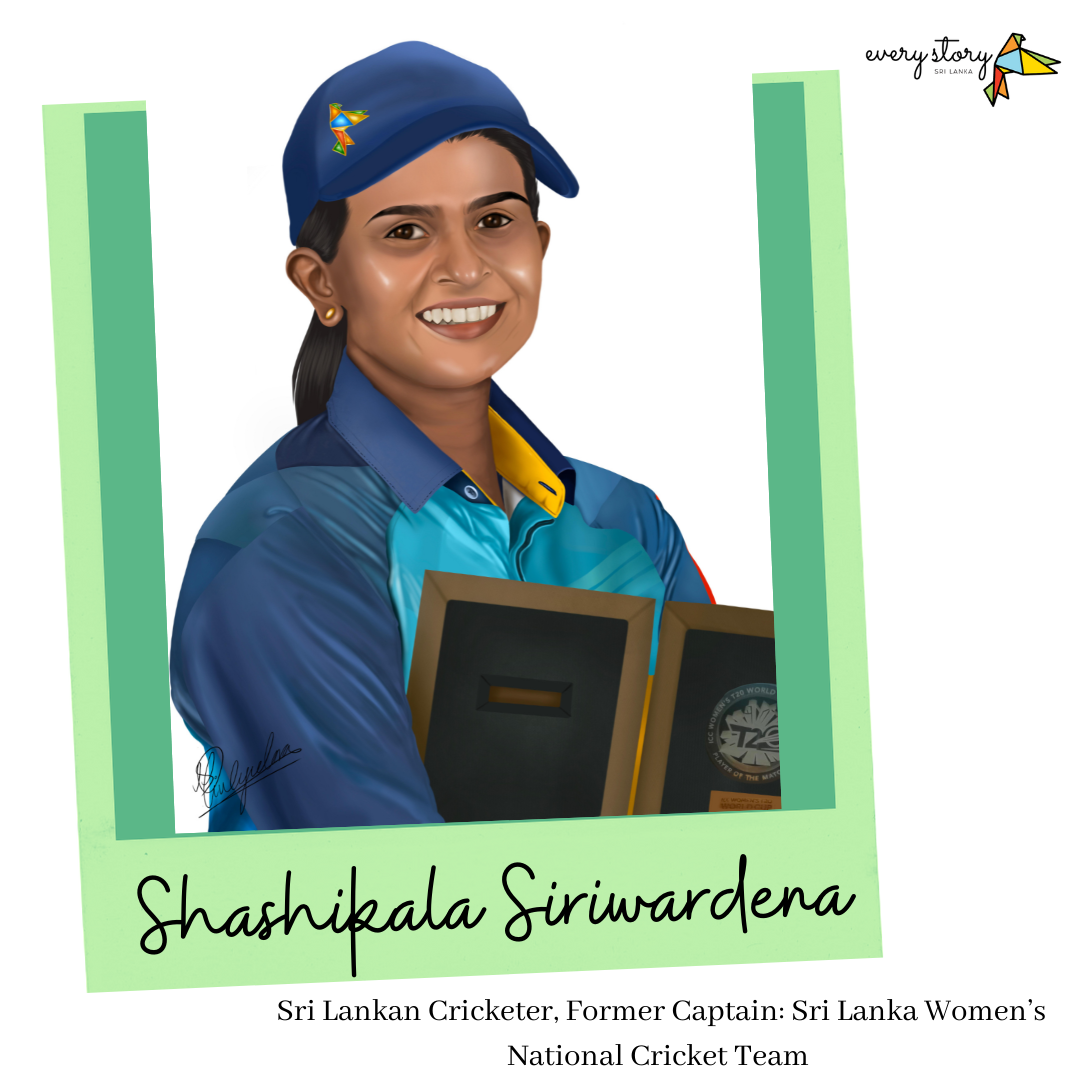 Everystory Sri Lanka presents the first thirty stories from our ongoing work to create a compendium of Sri Lankan women’s stories — featuring those whose lives, work, and experiences have shaped and are shaped by Sri Lanka’s social, political, and cultural contexts.

From the Stories of Sri Lankan WomenArchive — Shashikala Siriwardena

It is an indisputable fact that Shashikala Siriwardena is one of the best female cricketers to have ever emerged from Sri Lanka and in the world. Described by ESPN journalist Andrew Fidel Fernando as Sri Lanka’s “first real woman cricketing star”, and an all-rounder who “won games by herself”, it is no surprise that her teammates called her ‘the legend’. A young upstart who made an impressive international debut taking two wickets (2/20) and scoring 27 against West Indies in Kingstown, St. Vincent in March 2003, in an ODI that Sri Lankan won, she grew into a captain known for her empathy and a player of international repute who earned the respect and admiration of her peers the world over.

A bowler who likes to spin the ball irrespective of the pitch, she carried this attitude throughout, charging forward despite challenges and obstacles to lay claim to a cricket career that was as long as it was fruitful, laden with record-setting achievements both domestically and internationally.

Shashikala’s passion for the sport of cricket was obvious from an early age. Having watched in fascination her older brother play backyard cricket with his friends, she started joining other children her age in the neighborhood whenever they played. At age 12, she joined Palink Sports Club as its only girl player at the time and experienced hardball cricket for the first time. Just two months later, she was sent in to fill a vacant spot in one of the teams competing in a girl’s six-a-side tournament. “Not much taller than the stumps,” and with no helmet to complete her kit, playing with much older girls, she was hit by a ball, breaking her nose. When she came to the hospital after her nose was fixed and cleaned up, however, her first question to her father who was at her side was an inquiry into the state of the match she had been forced to leave. On their way home, she even fought with him to return to the ground so they could find out if her team had won and if she would get the opportunity to play more matches. It was the day, Shashikala says, her father realized it would be impossible to stop her from playing cricket.

Known for her right-arm off-break and right-hand batting, she remains the leading wicket-taker for Sri Lanka in both ODI and T20I formats and the second-highest run-scorer, having scored over 2000 runs in ODIs and over 1000 runs in T20Is. In 2014 she was ranked the №1 All-Rounder in the World by the ICC and was selected to play for the first-ever World XI Women’s Team in their match against an MCC XI played at the ‘Home of Cricket’ — Lord’s Cricket Ground — in the Lord’s bicentenary match. Even on her final tour for Sri Lanka playing the Twenty20 World Cup, she played at the highest international levels and produced a sensational swansong. She was recognized as the Player of the Match, achieved the best bowling figure of 4/16 at the tournament, and ranked №6 in the ICC all-rounder rankings in the weeks before the tour, making her the top-ranked Sri Lankan player at the time. In November 2020, Shashikala made her Women’s IPL debut, playing for the Supernovas.

Not only is Shashikala Sri Lanka’s longest-serving woman cricketer in ODIs but has captained the team the most number of times (58 ODIs and 40 T20s) since she was first handed the mantle in 2005 at the age of 20. A leader by example, she is a team player befitting its full definition, always prioritizing the needs of her team. As much as Shashikala has given to cricket, however, she claims it has taught her as much in living her life, from learning to be in the moment to trust absolutely, the power of empathy, and the hard work that is required to keep people working together, as a team. In fact, she states, “I have learned everything I do to live right now from cricket [and] from what happened while playing cricket”.

And while she may have retired from playing international cricket, Shashikala has not retired from women’s cricket. She hopes to continue to be a part of Sri Lanka women’s cricket, as a coach to young players, venturing into umpiring and perhaps even managing the team someday. Whatever role/s she takes on in the future, she plans to be an active element of a whole that sees the Sri Lankan women’s cricket team achieve the top ranking in the world.

Born on the international day of love, she says that her one wish for the world is more love. If she could change only one thing in the world, she says, it would be for people to look at positive elements of a situation or person first, before they focus on the negativity. “All we hear are complaints, complaints, complaints, all the time,” she says, adding, “It’s not that there aren’t a lot of negative things out there, but if each and every one of us changed to [focus on the positive first] maybe something good will come of out it.”

(Rikaza is a writer, thinker and storyteller. For
over a decade now she has helped people, brands and organisations find their unique stories and authentic voices and communicate them to the world. A former journalist passionate about human rights, she lives in the suburbs with one daughter, a few cats and a pile of books.)

This article is pending support to be translated into Sinhala and Tamil. Please email [email protected] if you would like to support us with translations or if you have any questions.