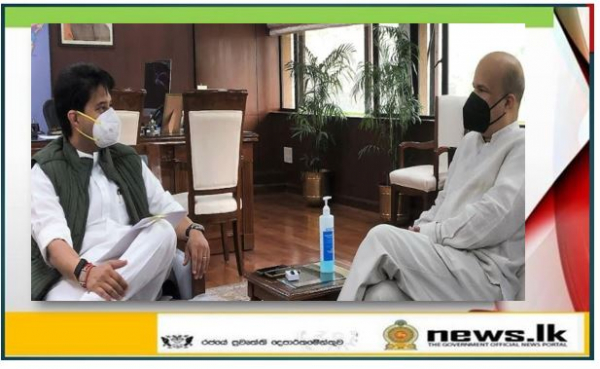 Minister Scindia accorded a warm welcome to High Commissioner Moragoda. The High Commissioner thanked the Minister for the hospitality, and the excellent arrangements that were in place for the Sri Lankan delegation that arrived in India for the opening of the Kushinagar International Airport in the inaugural flight from Colombo. Minister Scindia thanked Sri Lanka for this gesture and said that the opening ceremony was enriched by the presence of the Sri Lankan delegation.

The High Commissioner requested the Minister to seek the possibility of resuming flight operations between the two countries as per the pre-covid schedules, and sought his assistance for greater connectivity via increased air services, particularly through budget airlines. He also mentioned that Indian tourists have accounted for 20-25% of the total tourist arrivals in Sri Lanka; by far the largest single source of tourism.

Recalling the presentation by Sri Lanka of the photographs of two murals from the Kelaniya Rajamaha Vihara to be installed at the Kushinagar International Airport, High Commissioner Moragoda stated that Sri Lanka is willing to present similar photographs to the other two international airports in the Buddhist circuit, i.e., Bodh Gaya and Varanasi to be displayed permanently. Minister Scindia responded to this proposal affirmatively.

The Examinations Department invites applications for the competitive examination to…

Attorney-at-Law Asela B. Rekawa has been appointed as the Chairman…