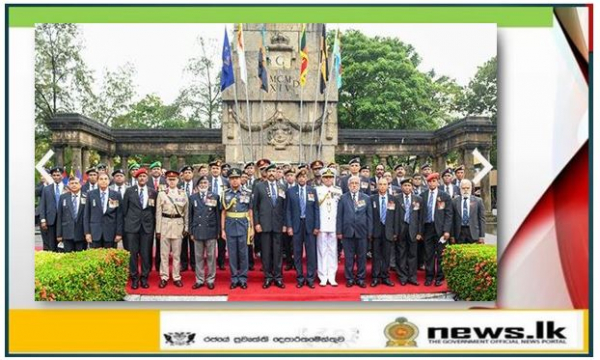 The dignified ceremony presided over by Defence Secretary, General (Retd) Kamal Gunaratne was attended by Commander of the Navy, Vice Admiral Nishantha Ulugetenne.

The Remembrance Day was originally adopted to honour the War Heroes who sacrificed their lives during World War I and II. Today the movement signifies the supreme sacrifices made by the heroic military personnel in the defence of the Motherland with true spirit of patriotism, in the month of November each year.

This year’s commemorative ceremony has been organized by Sri Lanka Ex-Servicemen’s Association (SLESA) at Cenotaph War Memorial, Viharamahadevi Park, Colombo. To begin with, a two-minute silence was observed in honour of fallen war heroes and Defence Secretary, Foreign Secretary, Commander of the Navy, Commander of the Air Force, senior officers from tri-services and distinguished guests present on the occasion made floral tributes to the War Memorial recalling those brave souls perished for a noble cause.

The solemn rituals of the event came to an end with military honours in tribute to the sacrifices of all servicemen who had laid their lives for the country.

The proceedings of the event have been organized adhering to COVID-19 protocols in effect to prevent possibilities of the transmission of the pandemic. Foreign Secretary, Admiral (Retd) Prof. Jayanath Colombage, Commander of the Air Force, retired tri-service Commanders and senior officers as well as serving senior officers of tri-services and other ranks and rates were also present on the occasion.

In parallel with the main event, the Sri Lanka Navy also held Remembrance Day ceremonies today at the Naval Headquarters in Colombo, with the attendance of Chief of Staff of the Navy, Rear Admiral YN Jayarathne and other naval areas with the participation of naval personnel from ships and establishments.