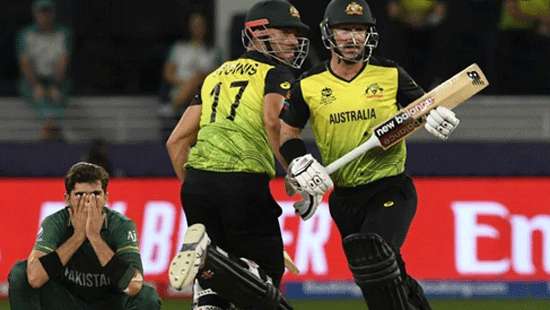 Australia has outlasted Pakistan in one of the T20 World Cup’s all-time semi final thrillers to book its spot in Monday’s final against New Zealand.

In chase of Pakistan’s 4-176, Australia needed 20 runs from the final 10 balls when Matthew Wade picked out Hasan Ali, who dropped a simple catch that ultimately cost Pakistan its tournament.

Wade went on to hit three sixes from the next three balls from Shaheen Shah Afridi, including two ramp shots, that won the game for Australia with five wickets and an over remaining.

For context, Afridi had conceded just 20 runs from his first 3.3 overs before conceding 18 from his last three balls.

It was the highest-succesful chase of the T20 World Cup, and came after Australia slumped to 5-96.

Australia’s World Cup dreams were nearly dead and burried after 15 overs when it needed 62 runs off just 30 balls, and then 50 from the last four overs.

Since the 2016 T20 World Cup, Australia had only ever made 50 runs off the last four overs on three occasions.