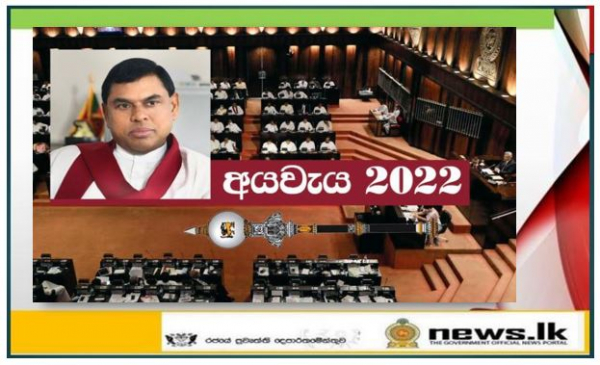 Hon. Basil Rajapaksa, Minister of Finance will present the Second Reading of the Appropriation Bill for the financial year 2022 in Parliament today(12). The
budget speech will begin at 02.00 pm, the Secretary General of Parliament Mr. Dhammika Dasanayake said. This is the 76th budget of an independent Sri Lanka.

The Bill was introduced in Parliament by the Hon. Minister of Finance on the 07 th of October.

This Appropriation Bill was published in the Gazette on 29 th September 2021 for matters relating to obtaining service expenses for the financial year 2022 from the Consolidated Fund or any other suitable fund with provisions and obtaining loans within or outside Sri Lanka.

Accordingly, for service expenses during the period from 1st January 2022 to 31st December 2022, approval is to be obtained for recurrent and capital expenditure related to Government Expenditure amounting to rupees two thousand five hundred and five billion three hundred and forty-six million five hundred and fifty-eight thousand.

Chapter xvii of the Constitution gives Parliament full control over public finances and requires the approval of Parliament on matters including taxation, consolidation of funds or any other appropriate fund with provisions.

Arrangements have been made to present this year's budget debate in sign language on behalf of the hearing-impaired community. Accordingly, a Sign Language Window will be telecast simultaneously with the live telecast during the budget debate. Secretary General of Parliament Mr. Dhammika Dasanayake said that arrangements
have been made to hold sittings in Parliament in accordance with all health guidelines and regulations during the entire period of the budget debate starting
rom today(12), the presenting of the budget statement to Parliament.

The Public Gallery will not be open to the public during the budget debate and only a limited number of government officials will be allowed to attend the Budget Committee session.

The budget being presented tomorrow is the second budget of the Government of His Excellency the President Gotabaya Rajapaksa, the seventh Executive President of the Democratic Socialist Republic of Sri Lanka. Following the budget speech, the Hon. Minister of Finance will host the traditional tea party. However, it will be limited to MPs, ministers, foreign ambassadors and invitees.