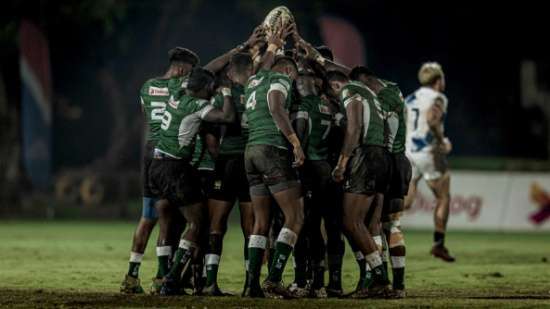 A high profile press conference by Sri Lanka Rugby (SLR) to kick start preparations for the Asian Sevens Series Rugby Tournament 2021 was strikingly overshadowed a few hours later by the sporting sponsorship giant Dialog Axiata PLC with the unveiling of its partnership with the sports regional body Asia Rugby (AR) as the main sponsor of the Asia Sevens Series 2021 – Dubai edition.

The drama was a follow up of a sequence of events that saw a Police SC organized 7’s tournament back by the Ministry of Sports prevailing over a proposed sevens tournament by SLR and culminating with the cream of national sevens rugby players from Kandy SC as victims of circumstances.

Be that as it may, SLR has moved forward in facilitating the preparation of the men’s and women’s squads for the upcoming Dubai event. The National selectors have named the touring squads subject to Ministry sanction. To add to the missing stars Reeza Rafaideen, Mithun Hapugoda, Kevin Dixon and Sudharshana Muthuthanthri fill up the injured list. Chief National Selector Asoka Jayasena confirmed to the ‘Daily Mirror’ that selections were finalized following one full session of semi-contact play of ‘four chucker games’ respecting the views of the coaching staff.

“We did not have a full contact session. The coaching staff has their reservations in having a full contact session. We were intent on selecting only those who are one hundred percent fit and were aware that the Ministry had already conducted a fitness session earlier,” explained the former national captain, a towering second rower in his heyday.

Commenting on the selection of the women’s squad, Jayasena was specific in mentioning the omission of experienced Anusha Attanayake occasioned by an unfortunate mishap during practice at Royal grounds and did not hide his concern of the women’s team having not featured in any competitive event for a considerable period of time running up to this tournament.

The reality is such. Yet, news reaching from the Sri Lankan camp is all about positive vibes of envisioning a new chapter. New kid on the block Nuwan Perera is highly rated. A full back during his days at the Randles Hill school and as a junior national player, Nuwan who was the player of tournament at the recently concluded invitational sevens tournament is said to be a fully-fledged scrum half. Skipper Adeesha Weerathunga will have newcomers young Samuel Ogbebor and Kushan Indunil upfront along with the relatively experienced Kanchana Ramanayake and Anjula Hettiarachchi. This endeavour to be constructive and result oriented should be a stepping stone to setting up a strong player base to be retained and sustained as a long term measure.