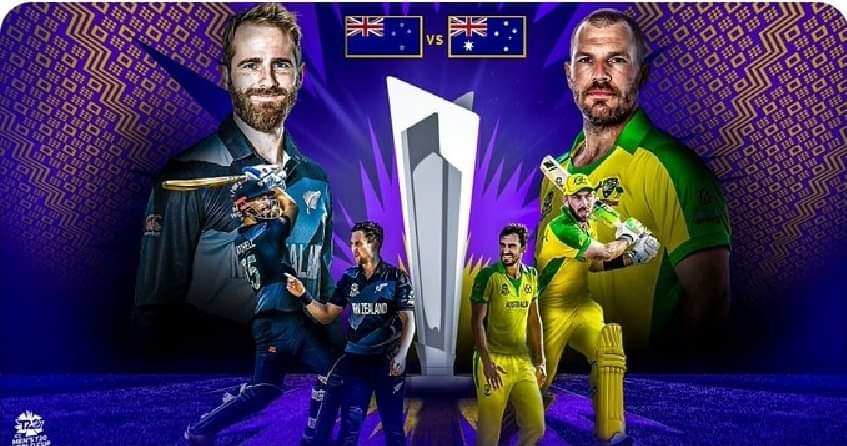 The ICC Men’s T20 World Cup 2021 is set for a cracking finish with trans-Tasman rivals Australia and New Zealand facing off for the World Cup trophy.

This is New Zealand’s first appearance in the final of the men’s T20 World Cup. Australia were runners-up in 2010. Either way, there will be a first-time winner crowned on 14 November.

There is a reserve day for the final.

If a match starts on the scheduled day and overs are reduced following an interruption but no further play is possible, the match will resume on the reserve day at the point where the last ball was played.

What did the captains say ahead of the game ?

Aaron Finch says the aftermath of Australia’s heavy defeat to England helped propel his side into the ICC Men’s T20 World Cup 2021 final, where they face New Zealand.

Finch’s side were soundly beaten by the ICC Cricket World Cup (50-over) champions in their third Group 1 game, going down by eight wickets.

Their campaign hinged on the five-day period that followed, allowing them to recover physically and redouble their tactical focus.

“We were disappointed after that game, obviously,” said Finch.

“We had a couple of days off to regroup after a gruelling couple of weeks of the tournament when we had to go through quarantine and really hard training.

“It gave us the chance to freshen up mentally and physically. We talked about staying committed to being aggressive.

“We felt we were a bit timid against England and got outplayed in the powerplay, particularly with the way that Chris Woakes bowled.

“It was just about staying really aggressive. In this format, when you’re up against top opposition, you don’t get many opportunities to get into the game and you have to find every small edge.

“We just reiterated that, as a team, that’s the way we wanted to go about the tournament.”

Since then, Australia overran Bangladesh and West Indies by eight wickets before a stunning five-wicket semi-final triumph over Pakistan, coming up on the rails to reach the final.

It is the second time an Australian men’s team have reached the T20 World Cup final, reaching that stage for the first time in 2010 when they went down to England.

Australia’s results in the shortest form of the game have been patchy in recent years – they last won a bilateral series in February 2020 and lost five in a row coming into the tournament.

“Everyone had written us off but we had a lot of confidence within in the way we were preparing and our strategy was coming together,” said Finch.

“We haven’t defied expectations, we came here with a clear plan to win the tournament and we’ve still got the squad to do that.”

Similarly, it feels like New Zealand are pegged as dark horses every time they enter an ICC major event.

That doesn’t stack up with their record – they reached the finals of the last two Cricket World Cups, the semi-finals of the 2016 ICC Men’s T20 World Cup and won the inaugural ICC World Test Championship.

They proved their big-game mettle in the semi-finals with a five-wicket win over England.

Captain Kane Williamson said: “The side has been operating well as a collective and playing for each other.

“We saw a pretty exciting semi-final, both semi-finals actually were somewhat similar. You see moments in games that are match-defining and games that can take quite a sharp turn when you have some key performances.

“That’s why the tournament has been exciting, you looked across the board and saw match-winners throughout and that every team could beat anyone on their day.

“We’ve tried to learn and grow throughout and we have another opportunity to do that.”

New Zealand lost fast bowler Lockie Ferguson to injury before the tournament and now will be without batter Devon Conway for the final.

Conway suffered a hand injury after punching his bat after being dismissed in the semi-final.

“The loss of Devon is a big one, he’s been a big part of all formats for us,” said Williamson.“ It’s a disappointing and freak thing to happen.”

“For us, it’s keeping our focus on the task and all of our players are focused on the opportunity, to go out and adjust to a different venue and opposition today” (withinputsfromICC)