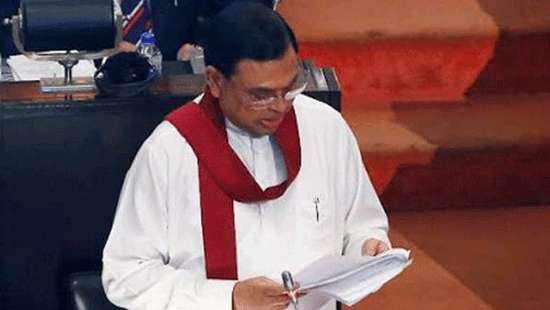 The 2022 budget was presented in Parliament this afternoon by Finance Minister Basil Rajapaksa.

The 2022 budget reading was a much anticipated event following a turbulent and challenging year for the Gotabaya Rajapaksa government.

In his maiden budget speech following his appointment as Finance Minister, Minister Rajapaksa addressed several areas including the demands by teacher trade unions, fertilizer shortages and relief for sectors severely affected by the pandemic.

Sri Lanka’s cash strapped government also proposed Rs. 3 million to be allocated to every Grama Niladhari division, in an extension of the ‘Gama Samaga Pilisandara’ programme. In a bid to limit foreign exchange outflows when importing milk powder, the government will also allocate Rs. 3.5 billion to promote fresh milk consumption in Sri Lanka.

Another Rs. Million 31,000 million was allocated to secure the household economy and ensure food security, the Minister said.

Among several unusual inclusions in the 2020 budget was a fee proposed to be levied from motorists involved in accidents. As a number of accidents are taking place on a regular basis, this would be an effective strategy to prevent motor accidents, the Minister said, while this fee will be reimbursed from the motor insurance.

Meanwhile sanitary facilities for prison inmates are set to be improved with an allocation of Rs. 200 million.
The retirement age of state employees was extended to 65 in order to strengthen the country’s workforce. Minister Rajapaksa assured that this will not create issues for young job seekers of the country.

It was also stated that a new salary structure would be introduced for state employees to avoid future salary anomalies.

With foreign exchange shortages and a mounting debt crisis, the government’s policies including measures to ensure food safety has been criticized by the opposition prior to today’s budget reading. The Minister of Finance proposed that the Rs. 8.5 billion loss of revenue incurred from the Central Bank bond scam be returned to the Treasury.

These allocations were made considering the impact of the pandemic on their livelihood, the Minister said. Meanwhile a regulatory body will be established to regulate the three wheeler service in Sri Lanka, according to a proposal by the Finance Minister.

The business registration fee for startups were waived off, while the government also hopes to revamp the telecommunications structure with Fibre Optic coverage to be provided for schools island wide. Rs.2,000 million were proposed to be allocated for Urban Housing Development while Rs.20,000 million were allocated to the Ministry of Highways.
Licenses for Telecommunication companies will be issued through a public auction, making way for greater transparency, Minister Rajapaksa said.

The Minister of Finance also said 2,000 MW will be added to the national grid from power stations at Uma Oya, Pooneryn, Simaybalandunwa, Mannar, Broadlands, Moragolla over the next year. Local industries such as Batik and Handlooks were allocated Rs. 1000 million while Rs. 5000 were allocated for the development of indigenous medicine.

Minister Rajapaksa said the private sector would also be encouraged to locally manufacture pharmaceuticals of the highest standards. The price of one cigarette meanwhile will be increased by Rs. 5, the Finance Minister said
A value added tax payable by banks and insurance companies was proposed to raised to 18% from 15%, while. It was also proposed that parliament members will be entitled to pension benefits only after 10 years in the House, extending of the current 5 year requirement. (KK)