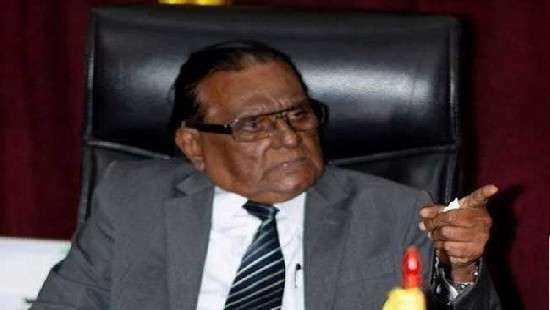 Pin
Share With Your Friends!
FacebookTwitterWhatsAppMessengerRedditLinkedInCopyShare
The Colombo District Court today further extended its Enjoining Order suspending the Sri Lanka Communist Party’s decision to remove North Western Province Governor Raja Collure as the Chairman of the Communist Party.
This enjoining order will be effective until November 23.
The District Court further extended its Enjoining Order till November 23, preventing the Sri Lanka Communist Party from appointing a new Chairman to the Communist Party.
Colombo District Court Judge Aruna Aluthge made this order subsequent to a lawsuit filed by Governor Raja Collure.
Meanwhile, the defendants including the General Secretary of Sri Lanka Communist Party filed objections against the enjoining order before Colombo District Court.
In his petition, the plaintiff cited Vice Chairman of Sri Lanka Communist Party Weerasumana Weerasinghe, General Secretary Dr. G. Weerasinghe, Party Organizer S. Wijesinghe, Acting Treasurer Premadara Dissanayake and former General Secretary D.E.W. Gunasekare as the defendants.
The plaintiff stated he had been expelled from party chairmanship at a central committee meeting dated 24th of October 2021 without a fair hearing (audi alteram partem) contrary to the principles of natural justice. The plaintiff further alleged he had been removed from the post of Chairman in an illegal manner contrary to the party constitution.
The plaintiff further said he had been removed from the party Chairmanship following his remarks regarding teachers as the Governor of the North Western Province that he would consider cutting their salaries if they failed to report to work upon the reopening of schools on October 21.
Collure stated that the party does not have power to remove him from the position since he made these remarks being the Governor of the Province, the representative of the President as the Chief Executive officer of the Province at the time the Provincial Council has become inactive.
He further alleged that the defendants have failed to conduct a fair disciplinary inquiry against him and they always acted contrary to natural justice.
Counsel Murshid Maharoof with Madushi Perera and Shoaib Ahamed instructed by Mayomi Ranawaka appeared for the Plaintiff. (Lakmal Sooriyagoda)
Share With Your Friends!
FacebookTwitterWhatsAppMessengerRedditLinkedInCopyShare