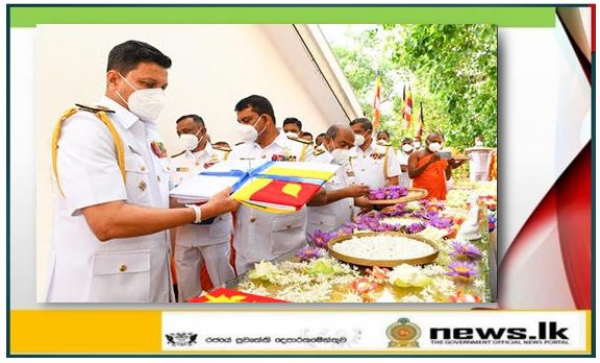 The Buddhist Association of Sri Lanka Navy organized these events to invoke blessings on the forthcoming 71st anniversary of the Sri Lanka Navy falling on 09th December.
At the outset, Commander of the Navy paid his obeisance to Atamasthanadhipathi, Chief Sanghanayaka of North Central Province, Most Ven. Dr. Pallegama Sirinivasa Nayaka Thero, before commencing the series of religious rituals attached to anniversary blessings. Subsequently, the Kanchuka Puja ceremony got underway at the Ruwanwelisaya on 11th November. Showing spiritual sentiments, Commander of the Navy and senior officers adorned the Ruwanwelisaya with a 300m – long Buddhist Flag brought by a colourful procession to the premises.

Following this, members of Maha Sangha representing Atamasthana conducted religious observances and chanting of Seth Pirith to those who took part in these meritorious deeds at the Jaya Sri Maha Bodhi. Conducting the main sermon, the Chief Incumbent of the Lankarama Vihara, Anuradhapura Ven. Ralapanawe Dhammajothi Thero glorified the Navy’s praiseworthy role for the termination of three decades of brutal terrorism that plagued the country, its contribution for the upkeep of Buddhism in the country as well as Navy’s effort especially during the COVID-19 pandemic. Next, he transferred merits on all naval war veterans who made supreme sacrifice and went missing in action and invoked blessings upon differently abled naval personnel. Further, blessings of the noble Triple Gem were called upon Commander of the Navy, all serving naval personnel and their family members for successful accomplishment of their dedicated tasks and future prosperity.

All the arrangements of Kanchuka Puja and Flag Blessing ceremonies were conducted adhering to COVID-19 protocols in force for the prevention of the transmission of pandemic. Chief of Staff of the Navy, Rear Admiral YN Jayarathne and his spouse, Commander North Central Naval Area, Rear Admiral Bandula Senarathna, Area Commanders, Director Generals and a limited number of officers and sailors from the Navy Headquarters and North Central Naval Command were also present on these events.